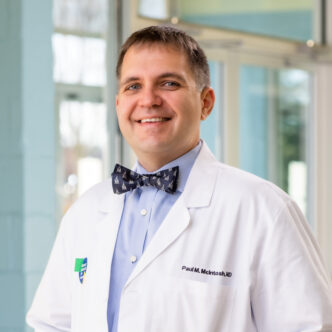 Originally from Manassas, Virginia, Dr. McIntosh attended the University of Virginia, where he earned a Bachelor of Science with Distinction in Chemistry.  He stayed at UVa for medical school and received the Arnold P. Gold Foundation Humanism in Medicine Award.  Dr. McIntosh completed his Pediatrics residency in June 2008 at Johns Hopkins Hospital in Baltimore, followed by a year as the Chief Resident in Pediatrics.  Before moving back to Virginia, he also spent two years working as a pediatric emergency room physician in Baltimore.  Over the 9 years prior to moving to RVA, Dr. McIntosh worked in private practice in Fredericksburg.

For Dr. McIntosh, one of the greatest gifts of being a Pediatrician is getting to walk alongside families as their children grow up.  He loves becoming a part of the families he serves.  He is board-certified in Pediatrics and is a fellow of the American Academy of Pediatrics.  Dr. McIntosh enjoys spending time with his amazing wife, Sarah, and his three children.  Having spent 8 years at UVa, he is also an avid Wahoo Fan!